modi will not be able to do anything unless he can control the ias lobby ; ashok gupta, vivek vihar

i wish that modi should be able to do some thing for the country.

for demoralised country like india, he is the only hope.

but he is not able to keep the modi wave live, for which he need more exposure and schemes in media.

and over and all , the ias lobby is so strong and and corrupt, that he would not be able to do any thing unless he can control them.

ias lobby , takes its birth right to do corruption in the country,  and many leaders are hand in glove with them for the common goal of making money..

in my view, ias lobby should be clearly told that if they can not make their family expenses in the pay , they get from the government, then they should work some where else, and leave the licence to take bribes and do curroption.

there should be at least one ccompulsorypaper in every class about the history of india, geography of india, and freedom moment of india. specially compulsory subject in ias.

there should be one more paper about the curroption in india and how to overcome it in the ias.

all are requested to contribute in the comment or write me directly .
ashok.gupta4@gmail.com
i am in vivek vihar, delhi, india 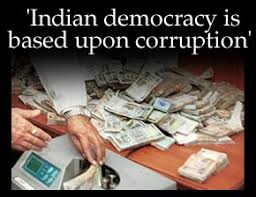