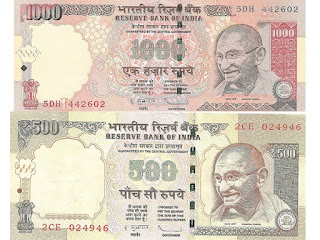 this demonetisation will give heavy losses for many persons, who were not using banks for different reasons.

by contacting to us you can do new import business , which will give you more profits then what you have lossed.
contact us in confidence.

an analysis - demonetisation of inr 500 and inr 1000 currency notes.

Prime Minister Narendra Modi, through an address to the nation, declared banning of INR 500 and INR 1000 currency notes from midnight of 8th November, 2016. This announcement is the consequences of government accepting RBI recommendation to ban these currency notes, and introduce newer, supposedly more secured currency notes. The reasons suggested behind this sudden and unprecedented action was to fight corruption, black money, and terrorism financing. However, the mainstream economy operating on electronic transactions, cheques, debit cards, internet banking, cash, demand draft transactions, e-transactions on account of business firms, companies and individuals will continue.
The background of this action needs to be understood. PM Modi has campaigned on the platform of anti-corruption and tough response to terrorism. Also, this government has been highly visible from the very first day of its office. This action also follows other precedents of similar highly visible government actions or announcement such as surgical strike in Pakistan Occupied Kashmir. PM Modi has tried to show his willingness to take fight on corruption, black money and terrorism financing. PM Modi has time again controlled the narrative of debate through such actions. He decides the subject of discussion and others merely comment on it. Suddenly, the discussion has moved from attack on democracy and freedom of press to demonetisation. At the least, no one can accuse this government of inaction or indecisiveness.
Details of the announcement and short-term plan of governments coordinated steps are available on official websites as well as many news sites. Repetition of the same is not warranted here. Analysis from various well-known and not so known sources would be available in due course. Economic sectors of India would be impacted profoundly. A brief impact analysis on various sector is as follows:
Equities/Stock Investment – The stock markets declined today due to double whammy of this announcement and news of Donald Trump winning the US presidential election. Indian market are also going through bearish phase. Markets declined nearly 4% intraday but recovered well and closed down by only 1.30%. In absence of government’s action, this decline would have been attributed to Trump victory. Hence, premature judging of negative impact of this announcement on equity investment would be highly questionable. Also, equity investment and stock markets are one of the most regulated sector of Indian economy for nearly 15 years now. In fact, I believe this action would bring positive influence to equity investment and returns in medium to longer term.
Bank Deposits – The psychological impact of this government step is likely to increase deposits with banks in short-term. This may temporarily be beneficial  for public sector banks. Private sectors banks are not likely to benefit much as they already have high CASA balances.
Gold – Gold has emerged time and again as an asset every one prefers in times of uncertainty and fear. Gold prices has increased globally in search of safe haven with the possibility of Trump’s victory. Gold prices increased in India as well, but I doubt any one would be in a position to buy large quantity of gold in short period of four hours from 8 pm to 12 pm when the old currency notes were valid. Also, the gold sellers would equally be sceptical to sell gold in such time. Therefore, I believe gold prices also would remain unaffected in near to medium term.
Real Estate – This is one sector which is likely to be the most negatively impacted. For years, this sector is known to be the conduit of black money, corruption and money laundering. Real estate will be affected not only by the announcement of 8th November but also by passing of the law – Real Estate Regulation Act, 2016. These two variables together shall force the sector to get its operations clean and become organised. I believe, small and city specific players in this sector would get eliminated in medium to long-term.
Small Business/Cash Oriented Business – This sector needs to be quickly reorient itself towards cashless transactions. RBI has already started providing alternatives in this direction by licensing payment banks. Mobile wallets offered by mainstream banks and companies like Paytm, Mobikwik are likely to flourish now. Most of the players in this sector are quite resilient. They need to learn new rules of the game (cashless transactions), they will learn new rules to survive as well as grow. Those who do not want to learn new rules or could not learn them would gradually be eliminated. These sectors would be negatively impacted in near to medium term but positively benefit in the longer term.
Asset Values in General – Asset values shall remain depressed in general due to unavailability of easy cash and the need to report transactions. A huge chunk of cash (the most idle of all assets) will become worthless, which in turn would impact valuation of other assets as well. Asset traded in well-regulated and organised markets would increase in value and those transacted in unorganised, cash focused markets shall decline in value.
Socio-Political Impact – All segments of the society – corporate leaders, individuals, salaried class – have welcomed the announcement and would be willing to cooperate with government in implementation of its plan. Regional political parties – BJD, JD (U), and TDP have already toed the government line. Only, staunch Modi haters are trying to find weakness in the plan and fighting to be heard.
Conclusion
The government has come out with a bold decision that is likely to become significantly disruptive for Indian economy. There would be confusion in the short-term and possible blow-back also from some sections of the society, but Indian middle class by and large is with the government. Asset prices will remain subdued for at least one or two years, but a more formal economy shall emerge in the long term.
Credit: This article is written by Prof. Mayank Patel, he is the valuation and financial planning expert at team indiabizforsale.com’s advisory service arm. He is a professor at EDI, Gandhinagar. He is also a qualified investment advisor.
B. E. (Electrical), M.B.A.(Finance), PGD in Treasury & Foreign Exchange Management, CFA(USA).